Doom 2 was a light bulb moment in education for me as a teenager. I’d picked up a copy for twelve dollars in a videogames bargain bin at Harvey Norman. There was a time when you could find quality games in store bargain bins instead of multiple copies of uDraw tablets (or whatever the store can’t sell at full price).

As a teenager I would regularly purchase PC magazines, as commercial games were often too expensive for me, but on PC magazine cover disks there could be found a vast array of freeware, shareware, demos, and all sorts of software. Some months after cheaply purchasing Doom 2, I bought a PC magazine that had on its cover disk a level editor for Doom 2.

I was excited at the prospect of building my own levels for Doom 2 but the instructions on the disk and in the magazine were vague, and this was the 90’s so resources online to help me learn how to do this were few and far between. I would have to take the brief instructions I had and teach myself the rest.

So that’s exactly what I did, and eventually I had a map that I built myself of which I could be proud. 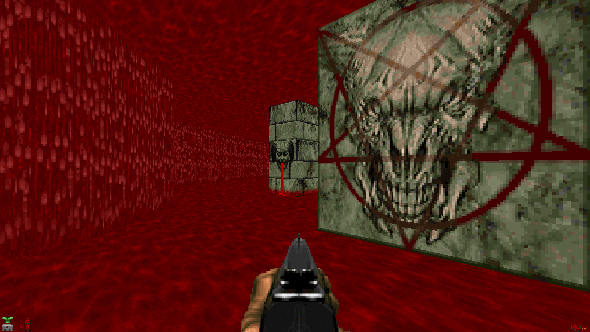 The word autodidactism comes from Ancient Greek and literally means self-teaching. It’s also an educational philosophy, the belief that you have the ability to learn whatever you want to learn by teaching yourself and that you don’t have to be held back by anything such as your history, your age, your socio-economic status, or your schooling. As Captain Planet said, “The Power Is Yours”. He was talking about saving the environment specifically, but the point stands.

There’s obviously some exceptions to that. For example, if you desire to work in law or medicine, then you’re going to need some formal qualifications in the relevant discipline in order to find work, but for other areas, especially the creative fields, what you need to know can be self-taught.

I think a lot of people are plagued by self-doubt though to begin attempting autodidactism. They convince themselves that they’re not smart enough, that it’s too late to start, or that they’ll never be able to achieve what they want by teaching themselves. It’s unfortunate, because none of that is true. If others before you have been able to learn how to do something, then so can you.

I’ve certainly been wracked with that self-doubt, even after I had success teaching myself to make my own Doom 2 levels. I listened to those negative voices that preach failure, and it’s crippling.

So here’s a few points about autodidactism to help you not be crippled by negativity:

Start small. You need to be able to see the forest through the trees, or to use another cliché, you need to start your journey at the first step before advancing on. It seems obvious, but I think people sometimes jump ahead too far too early by attempting something that’s beyond their current ability and then they become frustrated and confused. When I taught myself to use the Doom 2 level editor, I started with the very basics. I started by familiarizing and playing around the level editor interface, and then I taught myself how to make a basic square room. Only once I understood that, did I move on to something more complex. It was a slow process, and sometimes boring and tedious, but it worked in the long run.

As a former guitar teacher once said to me, even Paul McCartney and Kurt Cobain and Jimi Hendrix and (insert any other famous and successful musician here) had to learn the scales. They may not have enjoyed learning the scales either, but it was necessary to understand them before they could go on and compose their own complex pieces of music.

You will suck, at first. Expect that. TV Tropes calls it Old Shame, and as you can see from the examples in all the subpages at that link, it happens to everyone and in every field. As a noob in any field, by the very fact of your lack of experience and knowledge, you will of course not be as talented or skilled as others who have been doing it for longer than you. So don’t have unrealistic initial expectations by comparing yourself to those who are more skilled than you at the present time. Comparison is a killer of self-confidence. Compete with yourself instead.

Allow yourself to fail. Expect to fail. Embrace failure. It means you’re learning. Autodidactic Jeri Ellsworth talks about this in her video Secret to Learning Electronics – Fail and Fail Often. Her advice about learning electronics applies to the learning of any discipline. You’re going to make mistakes and that’s good. I’ve been in formal classes where teachers have scolded novice students for making mistakes which is awful. Instead, celebrate making mistakes because that’s how you learn.

The desire to be perfect as a learner is unrealistic. Instead, make multiple mistakes and you will improve.

The following anecdote in the book Art & Fear: Observations On the Perils (and Rewards) of Artmaking, illustrates the wisdom of making mistakes in education:

The ceramics teacher announced on opening day that he was dividing the class into two groups. All those on the left side of the studio, he said, would be graded solely on the quantity of work they produced, all those on the right solely on its quality. His procedure was simple: on the final day of class he would bring in his bathroom scales and weigh the work of the “quantity” group: fifty pounds of pots rated an “A”, forty pounds a “B”, and so on. Those being graded on “quality”, however, needed to produce only one pot – albeit a perfect one – to get an “A”. Well, came grading time and a curious fact emerged: the works of highest quality were all produced by the group being graded for quantity. It seems that while the “quantity” group was busily churning out piles of work – and learning from their mistakes – the “quality” group has sat theorizing about perfection, and in the end had little more to show for their efforts than grandiose theories and a pile of dead clay.

Do just that! Expect that you will suck, and allow yourself to fail, and with persistence you will improve.

It’s never too late. It used to be thought that when we reached adulthood, our brains were mechanically locked into the patterns and knowledge that we had developed during childhood. It was thought that it was difficult to make lasting changes to the makeup of our brains and develop new skills and abilities that we never gained during childhood. We now know from modern neurological science, as Doctor Norman Doidge explains in his book The Brain That Changes Itself that this is not the case. Our brains instead retain plasticity and can rewire themselves and change their makeup even into our old age. Want to learn a new language, learn to play a musical instrument, learn to program, learn to paint, or acquire any other previously undeveloped skill in your adulthood? It’s not too late.

This article The First Step Is To Start shows the following image from the book Drawing on the Right Side of the Brain: 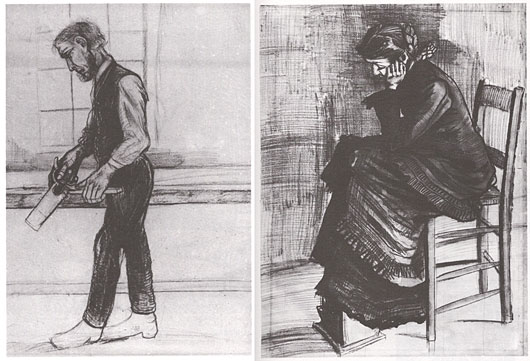 What a difference in those two years! Van Gogh was 27 when he started painting and with persistence improved in his craft. You don’t have to be a child prodigy (and who would want to be one with the stress and pressure they must face!) to be skilled and successful at something you desire to learn. You just have to start, be persistent, and not quit.

Don’t believe the myth of the gifted. Speaking of child prodigies, there’s a pervasive myth that success is only available to those who are magically talented enough – that you are born smart, average, or stupid. Raw talent only takes you so far though. Beyond that, it’s the persistence to learn what needs to be learnt is what counts. It’s easy to deceive ourselves that famously successful people are only where they are because of luck or innate talent. They may indeed have had some luck or innate talent which helped them start their career, but that’s only a tiny fraction of the story. Beyond that, it was their persistence and them deciding never to quit that resulted in where they are now. Don’t listen to those who want to divide the world into a class system of ‘dumb’ and ‘smart’. They’re wrong. If you want to know how to do something, you can learn it.

You’re not a fraud. This is something I still struggle with, and from talking to other people I know I’m not alone in this. I think many of us set imaginary milestones for ourselves in which we tell ourselves that we are just pretenders in our chosen fields until we reach that point. Prior to reaching that goal though, we’re just imposters, we tell ourselves. This is nonsense. You are what you do. Do you like to write? Then you’re a writer. It doesn’t matter if you haven’t sold a dozen books or haven’t been published in high profile magazines. The fact that you write makes you a writer. Do you make games? Oh you haven’t had your games published on Steam and Xbox Live? You haven’t got a fancy degree in game design from a fancy college? Doesn’t matter. You make games, therefore you’re a game developer.

The point is, don’t convince yourself into believing that you’re a fraud in your industry (whatever particular industry that is) because you haven’t as yet reached a certain pinnacle of success and others you know have. You don’t have to apologize for what you do by euphemistically coating it with phrases such as, “I’m just a student”, or “I’m playing around with learning how to do it”. No. You are what you do. So do it.

I once read an interview with Steven Moffat, the current producer of the television show Doctor Who. He was asked to give some advice to novice writers in how could they become successful in a writing career. His advice was that they should, “write”. It may sound simplistic, but he’s right. If you want to be a writer then write! And write, and write, and write! Keep doing it and don’t quit. You will improve and the rest will flow from that. 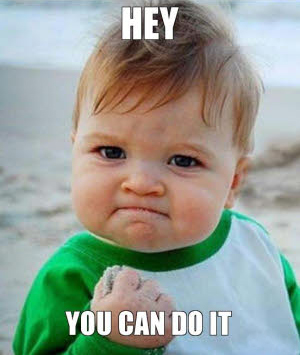 As I played through my Doom 2 level this week I found myself heavily criticizing it. I’d comment aloud to myself all the things I would’ve done differently if I were making it now. 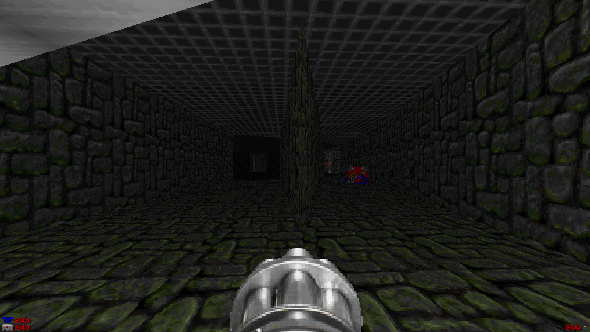 I don’t like how this supposedly brick wall that divides these two hallways tapers to such a narrow point. 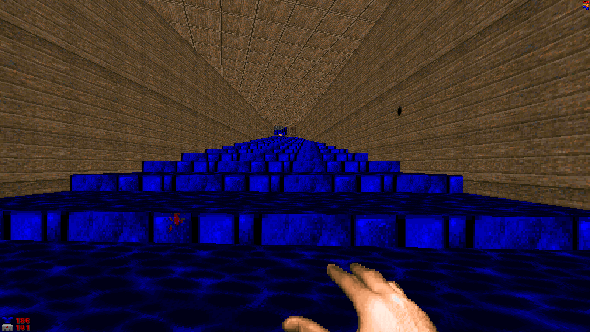 This stairway was meant to have water rushing down it but there was no water texture that came with Doom 2 that worked on a vertical plane so I used a blue brick texture instead. Why didn’t I just make a new animated water texture to use instead?

I could be here all day pulling it apart but that would be futile. I did the best I could at the time as a beginner, and of course it wasn’t perfect. However, that doesn’t matter. What matters is that I had something that I wanted to learn how to do that I taught myself how to do.

There’s no reason why I can’t do that now. We all can.

p.s. if you want to play the .wad file that I made back then for Doom 2, you can download it here.

4 Responses to On Teaching Yourself